To share your memory on the wall of Kenneth Clyde Holt, Sr. , sign in using one of the following options:

Provide comfort for the family by sending flowers or planting a tree in memory of Kenneth Clyde Holt, Sr.

Provide comfort for the family by sending flowers or planting a tree in memory of Kenneth Clyde Holt, Sr.

Kenneth graduated from Tillar High School and began his lifelong career of farming, of which rice was his favorite. He was a pioneer in the practice of water seeding rice, locally known as “mudding it in.” He loved flying airplanes and spent a vast majority of his time with his family. He was a member of the McGehee First Baptist Church where he sang in the choir, was a deacon, and taught Training Union to youth.

He was preceded in death by his parents and brother, Sammy Holt. Survivors include his wife of 61 years, Vashti, of McGehee; sons Lewis Holt and his wife, Beth Ann, of McGehee; Ken and his wife, Lorrie, of Dumas; his sisters Joyce Holt Kimbro of Tillar, and Peggy Holt Goodgame of Dumas; his grandchildren and great grandchildren Kathryn, Jonathan, Mary Kathryn, Anne Camp, and Elizabeth Love Byrum of Starkville, Mississippi; Hilary, Bert, Hazel, and Kip Crowley of Mathiston, Mississippi; Bradley, Courtney, Camden, and Brant Holt of McGehee; Kara Beth, Colby, and Samuel Linn of McGehee; and a host of nieces, nephews, and cousins.

To send flowers to the family or plant a tree in memory of Kenneth Clyde Holt, Sr. , please visit our Heartfelt Sympathies Store.

We encourage you to share your most beloved memories of Kenneth Clyde here, so that the family and other loved ones can always see it. You can upload cherished photographs, or share your favorite stories, and can even comment on those shared by others.

Posted Nov 09, 2020 at 12:05pm
We were sad to read of Kenneth’s passing. We remember him from his many visits to Hampton Pugh Company and the short time that he was our back door neighbor when we moved to Shannon Drive. Our prayers are with the family at this time
Comment Share
Share via:
JM

Posted Nov 08, 2020 at 01:38pm
I am saddened to hear of Kenneth's passing. Vashti, you will be in my prayers. Judy Dunn Magee
Comment Share
Share via:
JC

Posted Nov 07, 2020 at 08:25pm
It was with sadness that we learned of the passing of Kenneth. Kenneth and all his family have been our special friends for many years. He will be missed by us all but we have comfort in knowing he is now in a better place. May God comfort each of you during this time of loss. Our prayers are with each of you.
Ann & Jerry Carlton
Fayetteville
Comment Share
Share via:
TC

I am so sorry to hear of Ken's passing. I have such fond memories of y'all from growing up in McGehee and going to First Baptist Church. Praying for you and your family during this time. 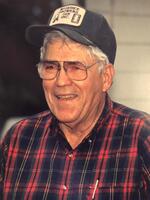