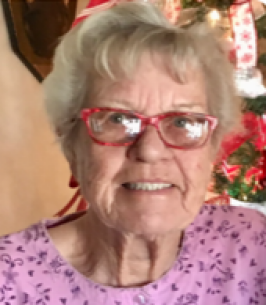 Virginia Joan “Tootsie” Head, 88, was escorted to heaven on Saturday, April 30, 2022 surrounded by family. Tootsie was born on October 29, 1933 to Ess and Eula Pearl Parham Robertson. She was brought up during a time when times were hard. Even in her youth, she labored handpicking cotton alongside her family, who were then working as sharecroppers. She learned early the value and importance of hard work, and she continued that same strong ethic all throughout her life. She married her soulmate, James Hayward Head, (Hayward as she called him) on March 22, 1952 and they had five children, Steven Curtis, James Brian, Jimmy Don and twins Martin Larry and Melony Laine. They were married mere days short of 60 years when on, March 11, 2012, Hayward was called heavenward.
Tootsie instilled her strong work values in her children as well. She was highly industrious and many said she could work circles around ten women. A plainspoken woman, she said what she meant and meant what she said. She would help anyone in need. She was a fitting compliment and counterpart to her gregarious, fun-loving husband, Hayward. They had family and friends stopping by their home practically daily to enjoy Tootsie’s delicious percolated coffee and visit on their covered patio. Theirs was a busy household indeed.
Tootsie will be sorely missed by her children, grandchildren and great-grandchildren, other family, numerous friends, (most notably Bonnie Lee of Sherwood, AR, and devoted canine companion Lucy.
Other than her parents Tootsie was preceded in death by her husband James Hayward Head; grandchildren, Mitchell Head and Amanda Head; brother, Buck Robertson; sisters, Mildred “Siss” Sirratt and Janice Phillips; aunt, Pearl Tipton.
Survivors include sons, Steven (Barbara) Head of Idaho Falls, ID, James (Brenda) Head of Norman, OK, Jimmy Don Head of Dermott, AR, Martin Larry (Valerie) Head of Savoy, TX; daughter, Melony (Charlie) Patterson of Lake Village, AR; sister, Judy Cornelius of Houston, TX; best friend, Bonnie Lee of Sherwood, AR; special friend, Mitch Grant of McGehee, AR; 13 grandchildren and 20 great-grandchildren.
Graveside Memorial Service will be held at 2:00 P.M. Tuesday, May 3, 2022 at Dermott Cemetery with Larry Head and Mitch Grant officiating.